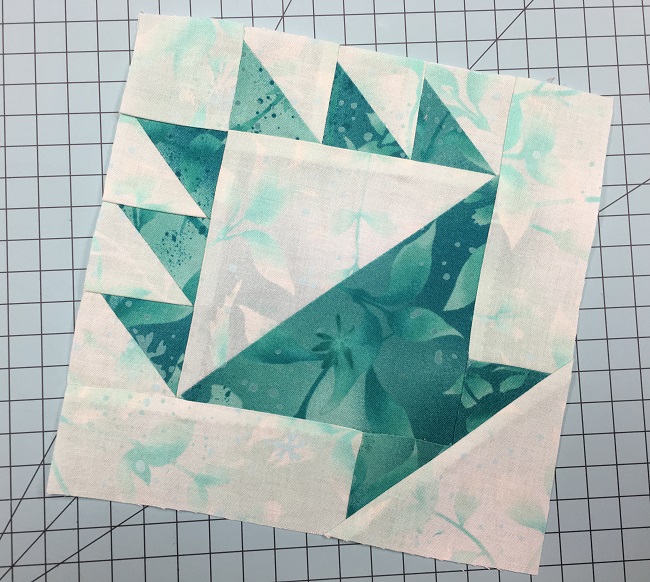 It only takes two 10″ squares and a few minutes to sew up a block. Before you know it, you’ll have a whole collection of these pretty blocks for your next quilting project.

Layer the light square and the dark square before cutting, so you can slice them both at once.

Layer the light and dark strips, right sides together before cutting. Using any 45-degree ruler, cut the triangles as shown in the photo above. By rotating the ruler, all six triangles sets can be cut from one strip.

Using a ¼” seam allowance, sew the triangle sets together along the long side of the triangle. Press the seams toward the dark fabric.

Cut the 6″ squares in half on the diagonal and sew one dark and one light together along the long edge using a ¼’ seam, in the same manner as the small triangles. Press the seams toward the dark fabric and trim the unit to 5″ square. There will be one light and one dark triangle not used.

MAKING THE SIDE STRIPS

Take the remaining light strip (the one you didn’t use for the small HSTs) and cut it in half, making two 5” x 2” strips. Pair each of these strips with a dark 2” square. Sew the dark square onto the end of each of the light strips.

SEWING THE UNITS TOGETHER

TRIMMING THE BASE OF THE CAKE STAND

Using a ruler and rotary cutter, line up the ruler as shown above. Take care to cut the straight line from one corner of one dark square to the opposite corner of the second dark square, leaving a ¼” seam allowance at the seam intersection at the corner of the large square.

Cut the light 4” square in half on the diagonal, in the same way the you cut the large triangles for the center of the block.

Layer one of the triangles on top of the cut edge of the block. Sew a ¼” seam along this diagonal edge. The triangle ends will stick out past the edges of the block. This is necessary for the triangle to be placed properly, resulting in an accurate seam. Press the seams toward the corner triangle.

The finished block will be 7½” square. Trim the edges if needed.

MORE VARIATIONS FOR YOUR BLOCK

Create sashing by cutting four 2” strips from another 10” square, and using a leftover 2” square for a cornerstone. Sew them together in a four patch to create a much larger block. Add borders to make it a small quilt or make multiples to set together in a larger project.

The number to blocks you can sew from one 10” precut bundle will vary depending on the combinations of light and dark that you choose. It will also depend on whether you use some of the squares for sashing. No matter how many you sew, or how you set them, you’ll have a pretty springtime project you can enjoy for years to come!